The simple answer is we’ve always done it that way; that’s how they built them in England, and—for the most part—English engineers built the US Railroads.

Obviously, this just pushes the question. So why did the English use 4 ft 8 ½ in?

This one is also simple and complex. The first English rail lines were built by the same guys who built the pre-railroad tramways, and—you guessed it—that’s the gauge they used.

Well…the people who built the tramways used the same jigs and tools that they used for building wagons. Care to guess the standard wagon wheel spacing back then in England?

This answer is easy. The wheel ruts on many of the old, long-distance English roads were spaced at exactly 4 ft 8 ½ in. They were built by Imperial Rome throughout Europe and England for their legions, and the roads have been in use ever since. All Roman war chariots had a wheel spacing of 4 ft 8 ½ in. These heavy chariots driven by the thousands over all these roads heavily rutted them. And if anybody wished to use these roads, they were thus obliged to set their wheel spacing to 4 ft 8 ½ in, or chance losing several wheels along their trip. 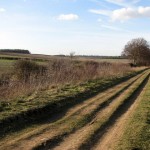 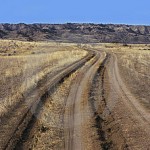 And why exactly 4 ft 8 ½ in? Because that’s the minimum width for a battle rig pulled by two war horses—essentially the width of two horses behinds. 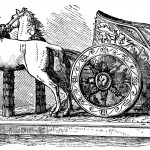 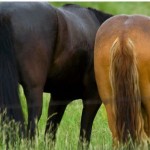 So the complicated part of the answer is that the United States standard railroad gauge of 4 ft 8 1/2 in is derived from the original specifications for an Imperial Roman war chariot.

Now, in the words of the inimitable Paul Harvey: Here is the rest of the story…

The Space Shuttle was initially boosted during its launch phase by two large solid fuel rockets attached to the sides of the main fuel tank – the solid rocket boosters or SRBs. The SRBs were manufactured by Thiokol at their Utah factory. The designing engineers wanted to make the SRBs a bit fatter than the 12.17ft of their design, but they had a problem.

Thiokol had to ship the SRBs by train from their factory to the launch site. The railroad line passes through a mountain tunnel, and the SRBs had to pass through that tunnel. By design, that tunnel is just sufficiently wider than the track to accommodate a railroad car, and the railroad track width, as you now know, was determined by the wheel separation of an Imperial Roman war chariot. 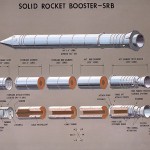 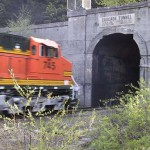 Cutaway of the SRB and a railroad tunnel

Thus, a major design feature of what was arguably the world’s most advanced transportation system, the Space Shuttle, was determined over two thousand years ago by the width of a horse’s ass.

(Is this story factual? I wouldn’t bet the kid’s college fund on it, but it certainly makes a good story to accompany a fine single-malt!)

This site uses Akismet to reduce spam. Learn how your comment data is processed.